Professor Ljubomir Madžar (5): Those who persecute the best ones have no future

From this book, a lot can be learned about local attitudes, values, the mass attitudes towards certain economic phenomena, including attitudes towards those who are successful entrepreneurs, and general social environment of our neglected, notoriously slow economic development. Mišković’s views on our nature and social environment in which economic development should be accelerated and sustained are justifiably unfavourable. A number of important facts are recorded in the book, including, first and foremost, mass support for his arrest with the usual, and again mass branding of the tycoon who was finally put where he belonged (see page 194). The author rightly concludes that … “Serbia is ashamed of its businessmen and considers them an ugly product of transition”. It was well noted that “people applaud when they arrest you, but they do not even know why you were arrested in the first place” (p.194). His observation that the term tycoon has become a mace in the hands of the authorities is very correct and that “all Serbian authorities … reach for this term as if it were a stone to be thrown at those who advocate reforms…” (p.194).

Arrest as a political advantage

Not only the majority of people of this nation, but also the prevailing part of its supposed cultural elite have a terrible aversion to the business world, and especially to those who are the most successful and eminent. It is not far from the Leninist aversion to the kulaks, but fortunately time has changed and there are no bloody persecutions. Nevertheless, it must be added that no regime persecuting and eliminating the most successful members of society can hope for good future. The text obviously shows that the authorities abuse this apparent, truly wicked social psychological deformation, this fatal mass defect, and it can be also added that this is actually the easy and almost certain, though morally distorted way of coming to power. It is a public secret that Miskovic’s arrest significantly contributed to the strengthening of some of the local political options and became the basis for their rise to the extent that presents a serious hazard for the society as a whole.

Envy, pessimism, intolerance towards more successful and better ones and easy falling under mass psychoses more or less exist in every nation, but a good, truly patriotic (“ataturkian”) power is recognized by the fact that it tends to eliminate or at least alleviate mass defects and deficiencies, while corrupt authorities are best recognized by the fact that, unfortunately, they survive owing to these mass defects and capitalize them through electoral results. Mišković’s book is valuable because it is a contribution to the understanding of this malignant syndrome; major social and psychological defects in our national being and the perverted authorities that are symbiotically bound to it. Possessed with basic instincts, it mercilessly abuses those heavy deformations for selfish political purposes.

Our people actually live their lives in deep misunderstanding with themselves. It is irrefutable and irreversible fact that only private entrepreneurs can instigate economic development together with accelerated production growth, creation of new jobs, increase in income and improved general living conditions. The state is not and cannot be a producer, an investor, an entrepreneur, a manager of economic affairs… In real life and at the operational level all this can be done only by private sector. That is why it is necessary to create a business climate, an environment in which people will be able to work freely. Our people are hostile to these important people, to creative actors whose creativity is more valuable and should be appreciated more than the creation of writers, painters, musicians, and even scientists. Entrepreneurs are the only ones whose work consists of increasing the means of living, increasing income, creating new jobs, generating resources that will enable us to enrich the natural surroundings and environment. The disagreement of these people with themselves is in the fact that they turn against their most creative and valuable individuals and support, applaud and vote for the one who is persecuting and quashing their potential savers and breadwinners.

Excessive expectations from the state 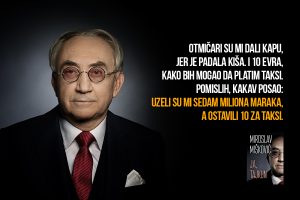 There is no text in which a careful reader will find the elements that make him doubt, or even strongly disagree with presented attitudes and judgements. There are but few of such things in Mišković’s book and their scope is far below the number of analyses and estimates with which it is impossible to disagree. Among numerous findings and beliefs with which one could not agree more, there is, however, one important and major component with which one has to disagree in principle. After having presented the range of methods by which the state disables and prevents economic initiatives and business processes, and having quite justly grimly depicted the state, government and masses of people on which they rely, Mišković suddenly and almost incomprehensibly requests that the state formulate some kind of development strategy and seriously embark on its implementation. On that he explains: “Serbia should have its own development strategy” (p. 217). To avoid misunderstanding, he further explains what kind of strategy it should be, namely that it should cover a wide sectoral range and include all the major sectors that the author considers crucial for development: the strategies should be developed “primarily in the agrarian sector, which is a key branch for the development of our country, then in the energy sector, but then small businesses and family businesses need to be developed as well… (p. 217). The author obviously envisages one major, almost colossal strategy that should encompass and stir practically entire Serbian economy.

In order to avoid misunderstandings, any more serious and extensive work requires some kind of strategy. It defines broad and general framework for action and main directions (strategic guidelines) for future action. However, the scope and range of strategy must be strictly consistent with the existing knowledge and information capacity, as well as with the resources at disposal of the system. In recommending strategies, important characteristics of the centres of administration and authorities that should implement such strategies should be taken into account. For example, a state affected by malignant and deeply rooted systemic corruption (Petrović 2018) is not the right address for requests for formulating ambitious strategies. Our country is far from the standard that would justify the recommendation to start designing some major strategic operations. Its inability to realize major ventures is explained by the data from the previous section: it is shockingly lagging behind in infrastructure development plans despite the fact that long time ago, (credit) funds and corresponding projects were provided for appropriate ventures. Even more fatal than this defect is its devastating corruption that has long been, and still is, diagnosed in a series of international reviews. Endemic corruption in our country may have been best explained by the M. Petrović (2018), identifying corruption of Serbian authorities and state as a systemic one, and concluded that it was destroying the economy.

Mišković’s recommendation is also in colossal discrepancy with the capability of our state for efficient operation and with its moral legitimacy. He demands results from such state which it is not able to produce. It is equally so unrealistic to request that the state finally define “what we need”, as only life itself and the market have the answers to that question; not one state has the answer to that question, let alone ours. In addition, that state is financially more than disabled, and the realization of a global strategy is out of question without a lot of money. Our policymakers must have in mind that the state has recently been close to bankruptcy and that, in the search for salvation, it had to resort to drastic measures of cutting down pensions and salaries in the public sector, with an alarming violation of laws that are still in force. In conclusion of this paragraph, the idea of a strategy makes sense only if it is appropriate to the capacities of the entity passing it, to its knowledge, information capacity, moral aspects of its behaviour and finally, to available funds, particularly financial ones.

One could not ask for a more serious strategy from our state, even if it had been able to provide it. Strategies are not that rare in Serbia, but the expected results are missing. The tendency of producing various strategies in Serbia is very prominent, but not many benefits came out of them. Therefore, they are characterized as rare even though a stronger word would be more appropriate here. In an analysis carried out in 2014, I established that there were some hundred strategies at the national level, and over 200 of them at lower levels. Still, there is no use whatsoever of these 300 something strategies.