Mišković’s account of his growth strategy of business system as a whole is truly enlightening and deeply analytical. The mentioned material clearly suggests that the spectacular growth of a business system cannot be financed by profit, because it is too small compared to the development ambitions of the most dynamic systems. If limited to financing from profits, such capacity increase would have lasted for decades. His strategy is innovative and significantly different. It resembles financial operations of major players in the Western economies. At the same time, it resembles big transactions with junk bonds/securities bought during their drastic impairment, only to be later sold in much more favourable general circumstances.

But in relation to this well-known strategy, Miskovic’s innovation has one big advantage. It does not operate with papers and titles but with real-world capacities. It involves buying underperforming companies followed by their rehabilitation and restoration of soundness, and their subsequent sale at prices far above those for which they were originally acquired. Such a strategy is macroeconomically productive and socially useful, as it truly results in increasing production capacities of the subject companies. But such a strategy requires knowledge, the factor on which Miskovic constantly insists. Only a few people are able to revive a company in difficulties and make viable one out of it, and Miskovic is almost unique in that important aspect.

The role of the state 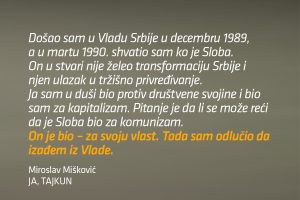 This is the context in which we should point out the need for a far-reaching and radical change in economic policy towards domestic business world. It is perfectly clear today (and even if it was not clear, irreversible decisions have been made in terms of the state’s withdrawal from direct economic activities) that the state cannot (and is not likely to) successfully perform in the roles of actors of production processes, investors, entrepreneurs… Its role is to invest in infrastructure and in the capacities of non-commercial public sector activities. However, this is only a small portion of investments, and the state carries out these tasks that are strictly under its domain very badly. As documented by the Fiscal Council (2015), the state performs this task very badly. Public investment plans are not met year after year (typical realization rate is about 60%). The share of public investment in gross domestic product is roughly half of the average one in our immediate international environment and even less than it should be, given the current lag.

Miskovic’s pragmatic and general systemic rational concept of the strategy and policy of scientific research work is very appropriate. After having repeatedly and always appropriately to a given context demonstrated and proved the importance of knowledge as the factor vital to business success, economic development and general progress, Mišković offers recommendations on how to increase knowledge and which knowledge one should develop. He is justifiably critical of the (up to) present non-selective approach and tactless and basically unhealthy ambitions to make significant breakthroughs in the field of fundamental research. His assessment that we have neither capacities, nor resources, nor people for that is correct. There is no need for it, as the stronger and richer will do it better than we do.

It’s only those who do nothing that make no mistakes

In addition, the results of fundamental research, particularly those of more relevance to us, are widely available and, unlike the implemented and operational ones, they are not protected by patents and other usual legal arrangements. This fundamental results that are necessary for us can be obtained from publicly available sources, with books, magazines and articles available on the Internet are so numerous, that the restrictions in the field of acquiring these knowledge exist only in us, and not in some external factors that would be imposed as objective obstacles. Miskovic convincingly advocates greater, predominantly prevalent, representation of applied and operational research and adapting their composition to the structure of our economy and the specific needs that this structure implies in the field of technology improvement and the improvement of work organization. Adapting to economic trends that are reasonably expected in the future also goes without saying.

Miskovic’s viewpoint on failure, both in business and life is also worth mentioning. Only those who do and attempt nothing do not face the risk of failure. Where there is work there is also a chance and risk of failure. The value of this book, among other things, is that it openly and without any usual inhibition tells about his failures. This is very useful because from the account of such cases the reader can learn much more than from the accounts of numerous actions in which the author of this book was successful. A friend of mine, an oral implantologist, a pioneer of this discipline in Serbia and a man of great international experience and reputation, announced a paper on his professional failures at a conference. At first, the audience was scandalized by his announcement, but when he presented the paper, and when it turned out how much they were able to learn from it, he received big applause and congratulations.

Analysing failures, the author sends out an important message. Failures are inevitable, and in a way, they go naturally hand in hand with everyday work and life. They must not be perceived as some sort of destined downfall, as an order to definitely end the activity in which such failure occurred. On the contrary, failure should be accepted as an opportunity to learn something new and important from it, to introduce corrections in further actions and to ensure that the results of such improved management are picked up as some kind of beneficial impact from the given failure. Analytically, failure can also be understood as a kind of investment: it obviously costs and is analogous to investments, but through lessons learned and corrections in management, it also produces appropriate positive effects; it turns out that the failure to generate these effects is analogous to investments.

Newer story → Professor Ljubomir Madžar (5): Those who persecute the best ones have no future