It is hard not to be impressed with Miskovic’s insistence on the necessity and effectiveness of decentralization. The inevitability of decentralization bears major part of the answer to the issue of failure of the collapsed collectivist systems of central governance and the majority state/social ownership was already clarified in expert debates long before. But the notion that decentralization is also important in the organization and management of companies which are usually taken as particles of decentralized arrangements in macroeconomic scale really bears a fresh view and original insight to this subject. Using simple but content rich language, the author explains his principle never to interfere with the dealings of his associates. Miskovic asks himself: why would I need an employee, if I was going to do his/her job?

It is not one man who makes decisions

Although this is not explicitly explained in the text, it is evidently implied that decentralization is necessary to increase decision-making capacity within the company’s system, or management potential in other words. Regular operation requires daily adoption of numerous decisions, and an individual can only make a limited number of them in the unit of time in a reasonable and rational manner. Decentralization implies transfer of responsibilities to personnel at lower levels in the hierarchical pyramid of management; their involvement in decision-making processes multiplies the capacity of the system to generate such decisions. The operational shortcomings of over-centralized systems are well known: when it is necessary to wait for the approval of one or a few people from the top for all major moves, processes slow down and at many points life simply stops. Many processes are blocked that way. The author demonstrates the need and range of decentralization appropriately concluding that people should be controlled not by the processes and modalities of their development, but by their performance and results.

Mišković insists on good preparation of investment and other economic decisions, but he is also aware of the need for fast decision-making. Chances for development appear in continuity, quickly and in succession, and their usage often requires swift reaction. On the other hand, decisions, especially the big ones, require thorough preparation, and the notion that a compromise must be made between these two great imperatives of business decision making is one of more valuable contributions of this text. Insisting on being fully informed is not very compatible with this important finding. It is not possible to collect all the information relevant for correct decision making in any decision making process. The literature has largely elaborated the idea that in economy, just as well as outside of it, decisions are made based on partial, and sometimes particularly partial information (Akerlof 2010, pp. 153-191).

The book also gives valuable insights in the damages that are predictably and inevitably arising from an aggressive and hostile state policy toward domestic capital. First of all, a well-known fact is pointed out, but that fact is so important that it is necessary to repeat it on daily basis: that local economic policy contains striking elements of discrimination of local business in relation to foreign one and it is made for its benefit. It is mainly about providing subsidies for employment that are formally equally accessible to domestic businesspeople, but when it comes to enforcement of appropriate regulations, everything turns out differently and reversed. This is yet another example of a far-reaching striking difference between the prescribed rules that can be found in official gazettes and what is rendered and delivered in reality. It has to be briefly pointed out here that all business entities on the territory of the Republic must have the same treatment and that giving priority to foreign investors even “merely” enforcing applicable regulations is an eminently anti-patriotic act. 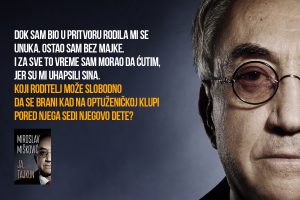 Another of professionally enlightening author’s statements is the one that politics puts pressure on domestic capital and that its stigmatization at the level of the system as a whole produces destructive and on so many levels disastrous decapitalization of the economy. First, (economic) political pressure on capital unfavourably affects the price of its use and its value decreases. In determining various variants and aspects of price of capital, the law of supply and demand is in place, and repressive state policy diminishes its price. A particular aspect of capital impairment is reducing the profitability of the economy, again based on the policy that creates familiar unfavourable environment for the use and growth of capital; in an important perspective of capital valuation through the sums of discounted expected future profits, everything that blocks and scales profit automatically impairs capital. With such a policy, the number of those who want to own capital in this country is obviously decreasing. Second, such a policy adversely affects domestic savings and even more adversely affects investments. Without investments, there is no increase in production capacity and, of course, no economic growth.

Further and equally macroeconomically detrimental consequence of aggressively targeted policy towards domestic capital (and this damage is manifested in the form of decapitalization) is syphoning off capital abroad into some friendlier and more pleasant harbours. The media reported that some 30 million euros are siphoned off from Serbia monthly. But with different policies these resources would have been invested in the growth of local economy. Is there anything worse one can think of than such an outflow of investment funds from an otherwise decapitalized economy and dramatically impoverished society?

With his striking portrayal of the economic and political treatment of domestic capital, Miskovic greatly contributed to the understanding of the roots of economic stagnation in Serbia and shed light on causes rooted in the higher ranks of local management. At one point, there is this almost poisonous observation: top management is interested in restricting investment and restraining economic growth as this is their way of generating half-educated and unemancipated voters on permanent basis in a poor country, and only such voters can support and endure such management that has pinned them down to the lowest European and global development levels. Even if it not literally true, this statement would be very useful and attractive from the cognitive point of view, as even suggestively, it points to the character and location of a great social evil.

← Older Story Professor Ljubomir Madžar (2): The rule of law as the basis of economic success