Professor Ljubomir Madžar (2): The rule of law as the basis of economic success

The second crucial element, when it comes to communication with science, including, in particular this contemporary and the latest, is Miskovic’s insisting on legality and constitutional order, that is, on the rules and their consistency and clarity as well as on their consistent and impartial implementation. Major prat of the text in his book can be understood as a closing argument for such regulation of economic life by the state that will primarily consist of establishment and development of rules, in the adoption of laws and bylaws, in capacity building of institutions that would efficiently implement such rules and prevent their evasion, and in the elimination of regulations that have not been confirmed as appropriate in practice and that turned out to be replaceable by superior alternatives.

It is impossible to overstate the importance and social purpose of such attitude of the author. Using formulations with very strong tones, he explicitly emphasizes that the economy does not need any privileges, anything beyond applicable regulations, and that stable, clear and consistently streamlined rules are the basis of every healthy business success, and of general economic progress as well. Here, the author is in agreement with contemporary scientific conceptions, especially those developed within institutional economics, the theory of property rights and contracts, as well as the theory of systems and economic policy. All this speaks much in favour of Miskovic’s book, but it is also the support of contemporary scientific concepts of socially rational structures and methods of regulating economic life.

There can be no standstill in business

It is surprising and refreshing how good and with how many logically motivated reasons something that could be called a dynamic principle in business life is based. In many places and in various contexts, the book depicts that changes are a factor that basically defines the forms and ranges of business life, and to which the essential factors of business success are reduced. Changes are a source of great chances and devastating threats, but proper business management harmonized with the highest standards is largely reduced to adjusting to changes, but also to their creation and direction. The business actor who fails to seriously address changes is destined to the loss of most valuable economic opportunities and to exposure to threats that may be a source of existential risk. The most striking is his explanation of the need for continuous development: even after the greatest imaginable success, a company must not be in standstill. 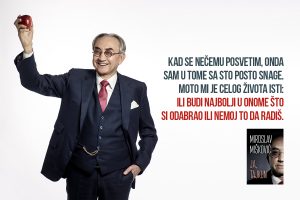 In economic life, Miskovic further explains, there is no “stationarity”: relinquishing further growth, regardless of how high the level at which such standstill is reached does not mean mere remaining on the reached level, but the beginning of a fatal regression, with the likely epilogue in decline. Possible dissolution of developmental ambitions does not turn out to be devastating only because the competition never rests, but also because the mechanisms whose proper functioning implies and requires constant growth and progress prevail in the very mechanics of business life.

Work ethics and maximum dedication to business are truly appealing and rare component when it comes to this type of writings. The author repeatedly emphasizes that there are no real long-term sustainable results without great enthusiasm rooted in the affinity for the work done, but also in loyalty to the company whose good functioning also includes the effort to deserve such loyalty.

Derived and indirect, but not less important, the effects of insisting on trust and loyalty consist in the fact that they materialize as an additional important result whose essential effect is strong collective spirit and ability for teamwork at different levels. It is impossible not to notice highlighting desire and some sort of passion to achieve success in work and success in company expansion, even without regard to the profit making motive as a source of commitment to business. The author explains that success in work and in carrying out associated responsibilities becomes the goal as such: one strives for success, Miskovic explains, because it carries a special kind of magic in itself. When people are well motivated and in favourable collective environment, they are doing their best to succeed because it is good to be a success. I defined this kind of work ethics and practice as a Beth Davis philosophy, as she used to say that she was only interested in art, while the money and fame came later and as a consequence, almost automatically and on their own in a way. A valuable insight presented in this text is that the prerequisite for true success is fascination with work and love for it, and that financial motivation does not always have to be in the forefront, and least of all denote the only driving force for achieving high performance.