The biggest problem of Serbian economy is employment.

Agriculture is definitely the branch where we have the biggest chance to increase employment, but at the same time it is the biggest problem of Serbia. The chances lie in the fact that our agricultural business has large potential, whereas the problem is that our agriculture is in such a bad state – worse than the state of industry. A worker in Kraljevo, Šabac or Zrenjanin has a small salary of up to 300–350 euros but a farmer who works on 5–10 hectares cannot earn even that much.

Why? As a country we apply an old-fashioned production method, particularly in Central and South Serbia. We have limited arable land at our disposal if we want to go into growing mercantile wheat and corn. Brazil, Argentina or the USA may achieve much better yields and profitability on their much larger land.

That is why we think that at the moment Serbia should adopt a plan about the choice of plants to grow and the area of the land where to grow those plants. The state cannot make producers choose what plants to grow. However, the state may use its agricultural policy in order to influence and stimulate the cultivation of certain plants.

For example, the plots which are leased (with the total area of 750,000 ha, out of which 250,000 is leased), the state may define the amount of rent depending on the plants being cultivated there. Those plots are state-owned and in that manner the state pursues its agricultural policy by stimulating plant production in line with that policy.

The strategy should be directed primarily at fruit and vegetable growing.

Agricultural production should be mainly the hands of individual producers and smaller households. Large companies such as our Delta Agrar should be production organizers in the following way:

In this way, 1 ha will ensure the revenue of 12,000–15,000 euros per year. However, in order to get this revenue. The initial investment is about 25,000 euros per hectare. Therefore, investments in agriculture are crucial and I am free to say much more important than those in industry, especially having in mind that there have been no investment of this kind in Serbia in the past 20 years.

Give construction workers the same conditions as in the region

All this I have talked about brings results after the first and the second, but mostly after the third year. Since we need some results immediately, I will also address the field of construction.

There are problems which prevent investors from realizing serious business with the construction industry.

Currently Delta has three important projects which are soon to be realized:

These projects are worth about 150 million euros only from the construction point of view, without taxes and the land.

These projects will bring between 20 and 30 million euros to the budgets of Serbia and Serbian towns respectively only from fees and taxes.

More importantly, these three construction sites will engage Serbian construction companies and therefore hire directly more than 6,000 workers in the second half of this year.

However, these projects are hindered by the problem with construction documentation.

In trade we have a concrete proposal: give us the same conditions in the field of construction as those given to investors in Slovenia and Croatia. Give us the opportunity to build with the same documentation that is required in these two countries.

Useful cooperation between trade and the Government

In the end, I would like to welcome the initiative of this meeting between the Serbian Government and Serbian businessmen. I believe that it will become a regular practice. Ideas from such meetings should become integral part of the Government’s new economic policy. Such economic policy will always be supported by trade and lead to higher employment and better life in Serbia.

(At the meeting with Serbia’s Prime Minister Aleksandar Vucic, 2014) 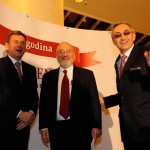