Company Delta Holding is this year’s winner of the main “Virtus” 2015 Award for philanthropy, for its contribution at the national level in 2015.

Prestigious “Virtus” awards were granted for the ninth consecutive year to companies and individuals giving material support and doing good things and thus setting standards which should be striven for in the world of responsible business.
This is the third “Virtus” award for Delta whose contribution to the development of corporate philanthropy was recognized by the community particularly in the projects “Plantation for Future”, “Fund for Future” and “Strengthening of the Family”.
Strategy and Development Vice President Marija Desivojević Cvetković said that “Delta” would continue acting in line with social responsibility which is considered to be its guiding business principle.
“Virtus” awards were granted by Trag foundation with the support of EU, Balkan Trust for Democracy and American USAID 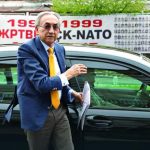